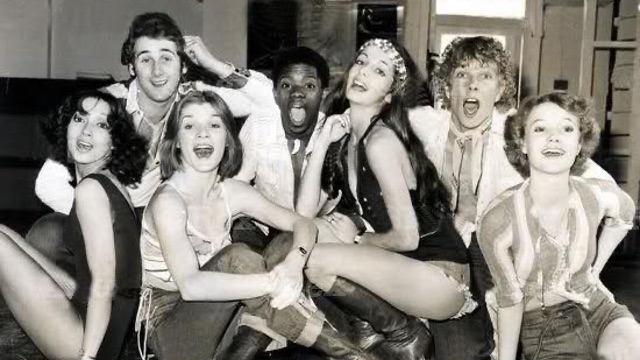 In early 1976, Ruth Pearson announced her retirement from Pans People, leaving just four members, all of whom who had joined within the last four years; Cherry Gillespie, Mary Corpe, Lee Ward and Sue Menhenick. Rather than continue with this line up or add additional members, it was decided by Colby and BBC to replace the dance troupe with a male and female group. Ruby Flipper was the new resident TOTP group, choreographed by Colby and managed by Colby and Pearson. Lee Ward left TOTP shortly after this decision was made, reportedly unhappy with the changes "It's a big mistake. Men rush home to watch sexy ladies. They do not want to see other men".

Rehearsals for this new group started in March 1976, and the group began appearing on Top of the Pops in May 1976. Whilst producers were aware of the switch to the new group, Bill Cotton, the then head of the light entertainment unit of which TOTP was part, was not. Ruby Flipper started as a seven-piece group, with three men (Gavin Trace, Floyd Pearce and Phil Steggles) and four women (Menhenick, Gillespie, Patti Hammond and Lulu Cartwright). Corpe was not invited to join the new troupe. Trace, Pearce, Steggles and Cartwright joined following open auditions, Hammond, an established dancer, was invited to join to complete the "look" following a later individual audition.

However, by October 1976, the powers that be on TOTP decided Ruby Flipper as a mixed gender dance troupe was not in step with the viewers, and so after complaints Ruby Flipper were replaced by another all-female dance troupe - enter Legs & Co.

The content below has been taken directly from the original TOTP2 website, which was archived by the BBC in 2007, and which is no longer accessibile on a modern browser.

Interview with Phillip Steggles (aka Haigh) from Ruby Flipper

Tell us how Ruby Flipper came about...

Well, Flick Colby decided she'd had enough of Pan's People after eight years. She thought it was time for a change and anyone aspiring to be a dancer at the time heard about it. I was 20 and I'd been working with BBC's Young Generation under Nigel Lithgoe [aka Nasty Nigel] and I had danced on things like the Vince Hill, Shirley Bassey and Vera Lynn series. Flick wanted to form a new group and she thought the natural progression was to introduce boys. She had an excellent reputation and being American, she knew that Saturday Night Fever and Grease were around the corner and knew that disco dancing for men was going to be big.

So how did you get into the group?

The whole dancing world heard about the auditions. It was like Popstars today, thousands upon thousands went to the auditions. Nobody knew exactly what it was for though. After three auditions, Flick managed to whittle it down to me and a friend who I danced with in Young Generation. It was a bit embarrassing when I got the job, but he's actually the choreographer of Star in Their Eyes now. In the final line up there were four girls and three boys, unlike any other group at the time. She then said that she wanted us all to have our own individual look. In Pan's People they'd all worn the same things each week and she thought that looked a bit dated. So, I got the job in March 1976 and we then rehearsed for two months, to see if we all gelled. When Flick was happy that we were all the right people, Ruby Flipper made its debut in May with The Stylistics.

Do you remember your debut?

Definitely, it was a magical time anyway. 'Dancing Queen' was number one, you had Elton and Kiki Dee's 'Don't Go Breaking My Heart', Candi Staton 'Young Hearts Run Free'...tracks you can still hear on the radio everyday.

Did you ever get to meet any of your heroes?

Well, meeting Cliff Richard was pretty great. He was giving out 'I'm Nearly Famous' t-shirts at the time, with the release of his new album, and everyone in Ruby Flipper got one. That was great. You were meeting great acts every week, but at that age - 18 or 19 - it didn't really sink in. We were so busy as well, so we never had time to stop and think about all the artists we were working along-side. Of course, now I look back and think...my God, WOW!

One of our favourites is your routine to 'Back In The USSR' in which you were wearing fur coats. It must have been difficult coming up with new ideas for routines and costumes all the time...

Well, Flick had to come up with a different idea every week. Unlike any other TV series I'd done, we often had less than a week's rehearsal. When I was on the Shirley Bassey series or Twiggy's, it was a week's rehearsal and then you'd film it. But, as you'll know, with Top Of The Pops in those days there was a rehearsal on a Monday and you were given one or two numbers to prepare for. On Tuesdays, however, when the charts came out sometimes those songs had dropped. The producer would then give Flick two new numbers to do. Sometimes, we literally had 24 hours to put our routines together and rehearse them. It was very exciting, but Flick had to be very careful with the dancers she chose at the auditions, because the turn around was phenomenal. It may have looked easy, but it was the hardest job I'd done. Flick was very talented though.

Where did you rehearse?

We rehearsed where Pan's People had originally rehearsed. We moved a couple of times, but it was generally in church halls. Flick was always hoping we might get a room at the Beeb eventually, but it never happened.

Well, I'd been at home for the weekend and came back on the Monday, ready for rehearsal. We'd just arrived, when two gentleman came in, the producers of the programme. They didn't really give a clear reason why, but they just said that it had been decided that 'Ruby Flipper will be coming to an end and that they'd be looking for a new group'. That was it! Now don't forget that I was only 19, Lulu was only 16, so it was such a shock. It was like a bombshell, because we'd only been going for six or seven months. It was terrible! We were such a happy group and we felt really well established even though we'd only been dancing together for a short time. I think it was such a shame and a very bad decision. Flick knew about the trends in dancing and the explosion of disco...she knew that boys wanted to dance more, it was cool for guys to dance. But the producers wanted to revert to all girls and so Legs and Co was formed.

Did you ever find out more about why they made that decision?

Flick said to me at the time that there hadn't been one letter to indicate anyone was missing Pan's People. It was a load of rubbish. Flick also showed me a letter from someone at the BBC and when I was in a book shop the other day, I came across the Top Of The Pops 1964 - 2002 book in which there was a chapter on Ruby Flipper and a reference made as to why we'd been dropped. I couldn't believe that they actually said the real reasons in the book. One of the reasons given to Flick was that ratings had gone down slightly. Now this was when the Bionic Woman had just started on the other channel, so it seems ridiculous that we could be blamed for the ratings going down. Ruby Flipper were really incidental to the music, we just complimented the programme. The other reason given in the letter though was that 'young teenage boys watching their favourite music programme would not want to see white girls dancing with black boys and then lifting them!' I should have taken the letter to the newspapers. I couldn't understand it because at the time Hot Gossip were just starting to come out with Kenny Everett and they were very much going for a sleazy image. Ruby Flipper was a fun, clean and wholesome group. Some routines were slightly suggestive, but nothing as powerful as Hot Gossip. But this was what the letter said and I've always remembered that. Flick was given no alternative though and she was told to change the group or lose the job. She managed to keep three of the girls from Ruby Flipper, but she really didn't want to be doing the same thing again.